There are no upcoming events at this time.

Parents are invited to register their children to play chess in events organised by the HSCA, including the Hertfordshire county teams. Once you submit the form, we will be in touch with more details.

Your contact details will only be used by the HSCA Committee and Team Managers (under-9, under-11, under-11 girls, under-14, under-18) to contact you regarding County chess activities, training and competitions.

If you have any further questions, please, contact Peyman (U9 manager) by email at chess@peyman.uk

Full results are available via the link: u9 Zone East

Full results are available via the link: u11 Zone East

Final Standings, Crosstables and Pairings are available on chess-results.com via the following links:

Players wishing to compete in the under-8, under-10 and under-12 age groups must qualify from one one the registered qualifying events. See list of  LJCC Qualifying Events

Players in the older age groups can enter the Finals directly.

Full details are available in the brochure: http://www.ljcc.co.uk/entry_forms/2019/LJCC%20Booklet.pdf

More information on the LJCC and associated events are available on the LJCC website: http://www.ljcc.co.uk/index.html

The Terafinals were played at Mercure Daventry Court Hotel, Daventry, over the weekend 21-22 September 2019

Tournament results can be found on www.chess-results.com via these links:

Overall, it was a good result by the team with some notable individual performances:

Although Hertfordshire  players struggled in individual games against the strongest teams we did manage to score points fairly evenly over the full range of boards by vitue of the jamboree pairings system.

Overall, it was a satisfying team performance with some notable individual performances:

Full results are available at: EPSCA U11 Final

Hertfordshire Girls team achieved their best ever performance in sharing 4th place alongside local rivals Barnet. There were 16 teams competing in the Final.

Full results are available at: EPSCA U11 Girls Final

Hertfordshire was one of five teams that qualified to the Under-9 Final.

Final standings and point scores are:

Detailed results (including player names and pairings) are available at: EPSCA U9 Zone East

Final standings and point scores are:

The top 5 teams have qualified to play in the final, to be held on Saturday 30th March 2019 at Grace Academy (Solihull), Chapelhouse Road, Birmingham B37 5JS.

Detailed results (including player names and pairings) are available at: EPSCA U11 Zone East

This is a first round qualification tournament of the Delancey UK Schools Chess Challenge for players who have not qualified through their own school or club’s tournament, and were under 11 years of age on 31st August 2018.

Top performing boys and girls qualify (separately) to the Megafinals in each of the age groups:

Players in the under-12 to under-18 age categories may enter directly to the MegaFinals.

After an absence of two of years, HSCA were delighted at the return of the Hertfordshire Junior Chess Championships together with a Stars Barred Tournament in the afternoon for less experienced players. 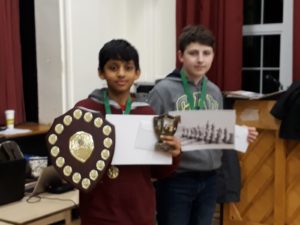 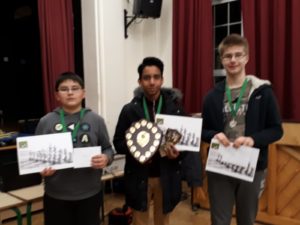 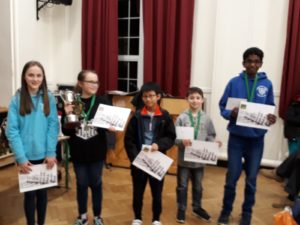 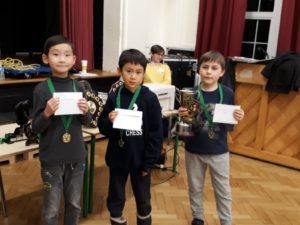 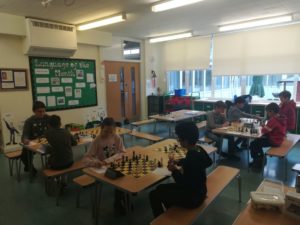 Players who attended had a range of experiences with some being new to competitive chess and others having grades of up to 100 ECF.

During the session players had the opportunity to play two graded games against opponents of a similar standard to themselves.

These games provided the basis of the analysis and discussion led by ECF registered coach, IM Ravi Kumar.

One of common themes that arose from the games was how best to conduct a mating attack on a castled king.

Players also received advice on how best to develop the pieces in the opening phase of the game and investigated some interesting positions aimed at developing tactical awareness and endgame skills.

Each school will play 6 rounds over 3 sessions, all to be played at Cunningham Hill Junior School on the following dates:-

A team will be 6 players ranked as accurately as possible in chess playing ability from 1 to 6.

Entries accepted up to 10th January 2019, provided there is sufficient space.

Congratulations to all the Hertfordshire players who qualified and played in the national final.

Below are links to the results chess.results.com and the scores of Hertfordshire players.

Congratulations to all the Hertfordshire players who qualified and played.

Below are links to the results chess.results.com and the scores of Hertfordshire players.

The dates have been updated. The match in October 2018 has been moved back to March 2019.

Some dates for your diary:

The HSCA qualifying event scheduled for Saturday 8th September has unfortunately had to be cancelled due to not having a suitable venue available.

There are, however, many other opportunities to qualify for the Championships as can be seen from the LJCC website: LJCC Qualifying Events

Players in the higher age categories (i.e. under-14, under-16 and under-18/21) are able to enter the Finals directly without having to play in a qualifying event.

The LJCC finals will be held at University of Westminster, Harrow Campus, Northwick Park, Harrow HA1 3TP, as follows:

Here are the results of the EPSCA competitions in which Hertfordshire competed this year. Apologies for the late posting.

Congratulation to the team managed by Sam for achieving a creditable tenth place (out of sixteen teams) in the national final.

This year we were fortunate to have Ursula step-in as this year’s team manager.

Starting from the difficult position of having virtually no returning players and with only a few months to prepare for the competition, it is a tremendous achievement to have gained ninth place (out of twelve teams) in the national final.

In the limited number of training sessions available which were run by husband, Matt, players developed a genuine camaraderie and team spirit; the cakes might have helped!

The team’s lowly position (tenth out of ten teams) can be explained by a number of factors which affected the team this year: firstly, a number of our stronger U11 players weren’t available; secondly, the snow in Hertfordshire on the day of the match caused six players to withdraw at late notice.

Credit must be given to the players that did turn out for the team and who individually met tougher opponents than they might normally have expected; the competition rules stipulate that players have to move up the order so that the defaulted games are on the lowest boards.

Well done to our highest scorers, Emily (bd 7) and Karan (bd 14), who both won two of their three games.

Under the leadership of experienced U9 manager, Sam, our team comfortably qualified to the national final by taking fourth place, only one point behind local rivals, Barnet. Six of the nine teams progressed to the final.

This year the Hertfordshire Megafinal was held at St George’s School, Harpenden. on the Saturday 5th May during Early May Bank Holiday weekend. The weather was good.

After accounting for late withdrawals (almost balanced by the number of unexpected entries on the day) we had a confirmed entry of 180 players which is a slightly fewer than last year.

All tournaments took place in the main hall and a selection of hot and cold refreshments were available in the adjacent Green Room. 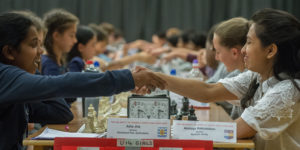 Although we didn’t have use of the school canteen as home base for parents, we managed to accommodate everyone in the classrooms.

The players had use of the large playground to get some fresh air and chill out between rounds.

All players who gained Supremo/Suprema titles or 3.5 points have qualified to the Gigafinals.

A list of qualifiers from this event will be submitted to the National Organiser following a final review of results.

A Last Chance Saloon, replacing the one cancelled due to adverse weather, has now been scheduled to take place at Skyswood Primary school during the school Easter Holidays.

The tournament provides an opportunity for players who have not already qualifed for the MegaFinals through their own school or club to do so in an OPEN competition.

Boys and Girls in each age group from u7 to u11 will compete to qualify to play in the MegaFinals.

Due to the adverse weather today’s Last Chance Saloon at Skyswood School, St Albans is CANCELLED.

We will try and find another date.

Hertfordshire entered teams in both the Open and Minor sections of the U18 County Championships which took place at King’s School, Grantham, on Sunday 25th February.

In the Open we faced rather strong opposition and experienced a rather a shaky start, but we performed considerably better in the second round.

Our top board, Taran Jina, had the satisfaction of winning both his games as did Alan Wang on board 10. Other players who scored well were Asha Jina (bd 5), Harjivan Singh (bd 6) and Aman Gogna (bd 7), each achieving a win and draw in their two games.

The School’s Trophy, for a team of 4 players from the same school, was won by our players from Haberdashers’ Aske’s school with 5.5 points. The winning Habs team comprised Harjivan, Aman, Param, Alan.

In the Minor section, we were handicapped by only being able to field a team of four, instead of six players.

A report of the event can be found on the ECF website through the link: U18 County Championships 2018

U110 and Stars Barred Tournaments

The U110 is a tournament for experienced junior players who have an ECF grade (or estimated grade) below 110, whereas the Stars Barred is designed as a friendly introduction to tournament play for beginners and less experienced players.

The cross-tables and full results are available on the UTU Swiss Results website through the following links.

All games played in these tournaments will count towards players’ rapid play grades in the ECF July 2018 grading list.

The 2018 Chess Challenge is underway with many schools and junior chess clubs running competitions which allow players to qualify to play in the ever popular Megafinals.

Players also have the opportunity to qualify from the one day events, details of which are now published on the UKSCC website: Last Chance Saloons

Please note: Only players in the under-11 and lower age groups are required to participate in the first round qualifying events. Under-12 and older age groups do not need to qualify and can enter the Megafinals directly.

The Hertfordshire Megafinal will held on Saturday 5th May (Bank holiday weekend) at St George’s School, Harpenden. Our maximum capacity is 200 players.

Further information can be found on the UKSCC website: Enter The Challenge

Maidenhead Junior Chess Club – Results of U11 and U9 Team Events

The results of the recent Jamborees in which Hertfordshire U11 and U9 teams participated are now available on the Oxford Fusion Chess Results website:

These events provide new and existing players the opportunity to play chess and represent Hertfordshire in preparation for the EPSCA Inter-Association Zonals and Finals that take place in March and April.

We also run an U11 Girls Team and would be pleased to hear from players wishing to play in any of our teams.

It will be held in combination with junior tournament comprising two sections:

The meeting is open to all chess parents and volunteers. It is opportunity to meet the committee, ask questions or make suggestions regarding the work of the Association.

If you wish to attend, please, email so that we can arrange sufficient refreshments.

Qualifiers to the LJCC final in December are:

Full results of the three sections are available on the UTU Swiss Results website, as follows:

The British Championship has now concluded form of Viagra and it is pleasing to report some excellent performances from Hertfordshire Junior (under-18) players. 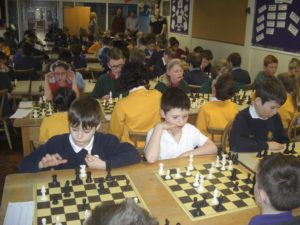 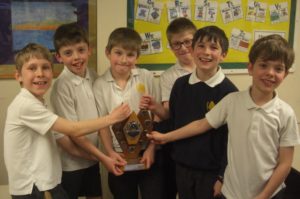 This is the new website of HSCA. It has a shorter and more user-friendly name, and its look and performance on mobile devices is improved by adopting a modern responsive template.

Our most recent event is the Hertfordshire Megafinal.